A pakistani hacker by name "H4$N4!N H4XOR" belonging  to "Pakistan Haxors Crew" who hacked the JayaTV website and AIADMAK site before has now hacked the Puthiyathalaimurai website again and left the following message. 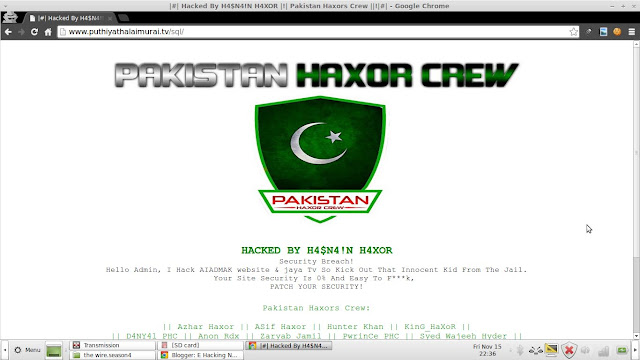 " Security Breach!
Hello Admin, I Hack AIADMAK website & jaya Tv So Kick Out That Innocent Kid From The Jail.
Your Site Security Is 0% And Easy To F***k,
PATCH YOUR SECURITY! "

EVEN SUN NETWORK IS LIKELY DEFACED-news on HINDU


He was talking about the recent arrest of  P. Eswaran by Central Crime Branch whom they arrested on suspicion of hacking the AIADMAK site. Eswaran said that he was only trying to fix the vulnerability and this hack seems to also  suggest that also. The pakistani hacker who initially posted  about the defaces is still active.

Though Eswaran was only trying to protect the website what he did is still illegal under section 66 of the IT Act . It would be very interesting to see how this case would play in court since it is the first of its kind.

The websites of two popular Tamil television channels, including ‘Puthiya Thalaimurai,’ were hacked on Saturday.
Pakistan Haxors Crew (PHC), the group that allegedly hacked the AIADMK party website on November 2, has claimed responsibility for this as well in a posting made on the defaced homepages.
The management of ‘Puthiya Thalaimurai’ channel has lodged a complaint with the Chennai Police.
When this reporter visited www.sunnetwork.in, the homepage of the Sun Group was also found defaced. The homepage of all the three websites looked similar, giving room to suspicion that the same group was involved.
The suspects said on the defaced homepage that they wanted justice and peace. They also wanted the release of the “innocent kid,” in an apparent reference to P. Eswaran (27) of Bangalore who was arrested by the Central Crime Branch (CCB) of the Chennai Police, on charges of attempting to hack into the AIADMK party website.
Additional Commissioner of Police (CCB) R.S. Nallasivam said Eswaran was not the real hacker. But he had made at least 300 attempts to enter the administrator’s account of the AIADMK party website.
“He admitted to have made several attempts to hack into the party website. We seized the laptop and other tools used to commit the offence. Efforts are on to apprehend the suspects who actually hacked these websites…we have sought the assistance of Anna University, National Informatics Centre and others in the investigation,” he told The Hindu. Hours after their website was hacked, ‘Puthiya Thalaimurai’ put up a homepage saying that the portal was undergoing technical upgrade and would be back soon.
The AIADMK website, police sources said, was managed by a team based at Ambattur here.
“They did not have adequate security systems to prevent hackers…but the fact that the websites of two leading media houses have also been hacked is worrisome. We are following some specific clues that may lead to the arrest of the suspects soon,” a police official said.

Recommend us on Google!
computerkirumi »